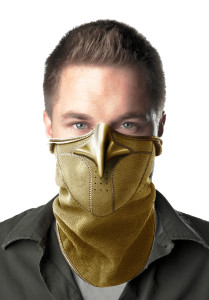 Horus is the son of Graf Markus. They are owners of the famous wine yards and breweries located on and surrounding the castle Falconstone. Their family has had ownership since the medieval times also the center of martial arts and stiletto fighting as well as falcon breeding and training. In his childhood Horus was caught in a tremendous fire and sustained such horrible injuries to his face that he has to wear a mask not only to protect his open flesh but also because he doesn’t want to share his real face with anyone. His mask is shaped like that of a falcon with a beak pointing out due to the fact that his nose also suffered horrible injuries and he needs the elongated mask to protect it. He only ever shows his face to Diva, the white Siberian falcon, strengthening their connection. Horus is also the leader of a small security company which uses falcons and their trainers for surveillance and security, to protect airlines from pigeons and small events. Since his childhood his schoolmates called him Falconman as his name was that of the ancient Egypt sun god Horus which meant half man half falcon. He was called in school already Falcon Man due to his mask and the fact that his family bred falcons. The falcon breeding is now the big income bringer, as the wine assets are losing money. Horus is a trained breeding expert, falcon trainer and martial arts expert. His aristocratic family background means he knows many high society and Jetset. He is a good friend of Mathias who at the present is the champion of the Grand Prix racing, working as the lead driver for VJ. Horus grew up with VJ playing since young kids in the castle grounds and discovering all the secrets of the castle. Horus has a special relation with the falcon called Diva who is a white Siberian girl falcon. She breeds the best baby falcons that can be sold for as much as $200.000 per young trained chick. 5-8 of those falcons are born each year. Horus has to artificially inseminate Diva by putting a finger with bio engineered sperm into her. Thus Diva thinks Horus is her husband and father of her children.